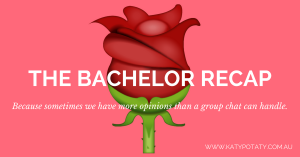 In fine Bachelor tradition, we open to beautiful women lounging around in a not-so-stylish mixture of pyjamas, beanies, floral frocks and full makeup. Thank goodness Osher arrives in the kind of cute khaki bomber jacket I’ve been looking for in a ladies’ size 14 all Winter, but I’ll forgive him as he delivers a date card for one of my favourite contestants, 30-year-old jewellery designer Laura.

Matty picks up Laura in a Bond-esque speedboat, and various Bachelor small talk is made – Sydney is beautiful, I feel so much freedom on the water, oh my GOODNESS yes that giant boat is where we’re headed, yada yada – before they recline and eat cheese and drink champagne on the front deck of a very large motor boat. Just like a million dates I’ve been on. Nothing special. (Jokes. My husband has better taste than that. We drink wine and eat cheese at home all the time – and when we go out, it’s for delicious ribs and risotto at a cool restaurant in Eumundi. No cheesy Euroyachts for us.) 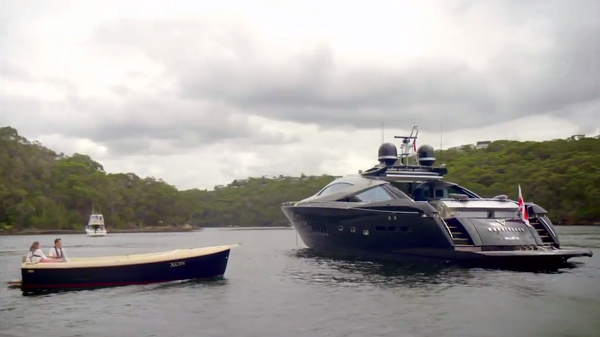 Sidenote: When Laura slightly awkwardly bounds onto the speedboat from the dock, she said that she was graceful like a llama. I like her.

Back at the mansion, the girls are love-hating the group date card, because there’s only one thing worse than sharing Matty with 11 other girls, and that’s being left out of any possible catfights that could take place on said date.

Sharlene (or as Jennifer likes to call her ‘Miss Happy Pants’ which is incredibly misleading, as I see NO parachute pants here anywhere) announces that Cobie, Stephanie, Michelle, Akoulina, Ellora, Alix, Lisa, Belinda, Elise, Sharlene, Leah and Simone  are invited on the group date. Our mate Jennifer (not our mate.) seems delighted that her house BFF Leah and Simone might have to duel it out on this group date, and we are left to imagine that she’s going to be chillin’ back at the mansion, throwin’ curses and stirring toad’s legs and dragon’s blood into a simmering cauldron. 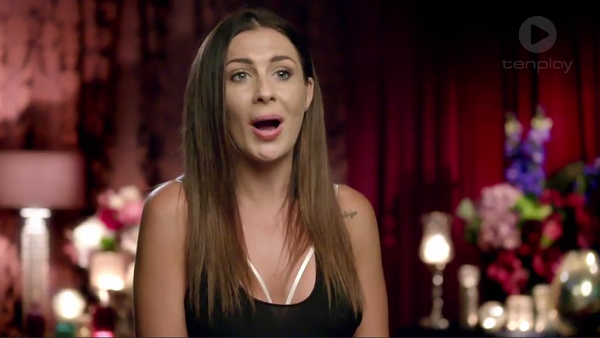 Matty flirts successfully with Laura as they settle in for a life-drawing moment by the harbour, although I’m sceptical that it’s actually Matty drawing as he is squinting directly into the sun behind Laura (until I see his drawing and realise that it was all him); and they settle into some very comfortable silence (surrounded by a production crew) which takes Laura straight to the top of my Bachie winner list.

What is with these girls? Laura is the second – after Ellora last week – to ask what Matty was thinking about while gazing into his eyes. HELLO? Are you in high school? Stop it. And then they kiss, to a soundtrack of violins, building to a sweeping crescendo (which sounded a lot like a local life insurance ad jingle which gave it a super romantic touch). Matty describes the kiss as ‘nice’ and is a little speechless afterwards, and gave Laura a rose for her kissing ability alone.

Osher whisks the group date ladies away to what looks like the local Abbey Medieval Fayre for a few sportin’ games for the wenches. Yuk. (Note, the term wench wasn’t used once in this entire episode, but it was implied. It was HEAVILY implied, y’all.)

We kick off the Renaissance fun with Ye Olde Piglet Catching competition for Cobie, Akoulina, Simone and Leah.

Before the producers agree to theme an entire group date again, can someone please talk to Osher about authenticity? Anyone who passed year 10 English should really know that the phrase ye olde is pronounced the old.  Originally, the English word ‘ye’ was spelled ‘þe.’ The symbol þ represents the letter thorn, a letter which died out in English. It had a sound somewhat similar to the Greek letter θ, which is a th- sound, so ‘þe’ is an early spelling of ‘the’. Over generations, the writing of þ changed, so that it looked like a different letter, wynn (ƿ), and eventually became indistinct from the letter y. It’s just substituted orthography, and you’re welcome. Back to the quality educational viewing and piglet-catching, right?

Matty demonstrates the correct porcine-capturing technique, and squeezes the meaty rump of that little piggy pretty much exactly the same way that I squeeze Trainee Mama‘s sweet twin babies’ thighs. Sorry Frankie and Evie, it looks painful when someone else does it. 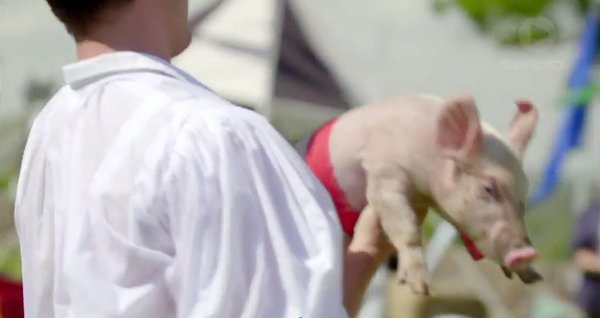 Leah is quite the pig catcher and claims that if you want some sausages, you’re going to have to catch the pig. I feel like she might have that embroidered on a throw pillow on her bed. Both Leah and Cobie catch their poor terrified piglets and are headed through to the Royal Banquet to dine with Matty.

Lisa, Sharlene, Michelle and Belinda are selected to participate in the next classical game – a combination of Quoits and Sack-racing – to try to win a seat at the Royal Banquet. Now I’m no medieval history buff (well I am a little), but I’m not sure that sack racing in Nicaraguan organic fairtrade coffee bags  was a traditional sport for ladies of the gentry in Henry VIII’s time. As the ladies Easter-Bunny their way along the course to throw their quoits, I was struck by just how glamorous this show is. As Lisa said after she and Belinda win through to the Banquet, she has sweat in her neck, back and crack! 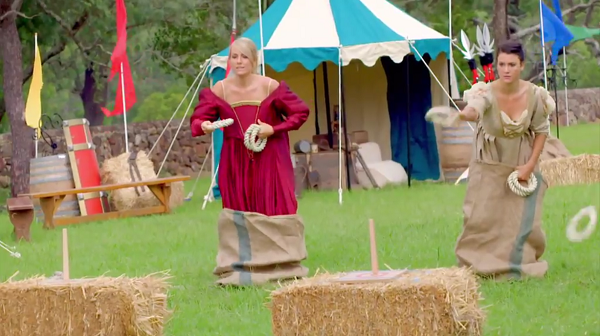 The final two spots at the Banquet table are up for grabs for Stephanie, Elise, Ellora and Alix, who hike their petticoats for a game of Medieval Football. Which is really just regular football but with a dilapidated-looking leather ball and no thugs with lead pipes down their trousers. Ellora brings all her Glamazon athleticism and aggression, and looks ready to take on a team of twenty men, but Alix and Elise play well together as a team (on The Bachelor, wot?) and win the final two places at the Royal Banquet table with King Matty.

They all awkwardly settle along one side of the table, and the wine flows. Leah’s effort to come across sweet and innocent after Matty invites her to dish on the drama is short-lived after she eggs Elise on to interrupt Alix and Matty – although Alix graciously stands up to allow Elise to enjoy her first proper one-on-one time.

Leah follows suit shortly and interrupts Elise before she’s really even had a moment to start a conversation with Matty, and Leah takes a seat in the garden. Cue the waterworks, and Leah cries into Matty’s shoulder over ‘who she is’ and how much this experience is so difficult for her caring heart, although she throws to camera and rates her acting ability as a 10/10. If Matty falls for that kind of rubbish again in future episodes, I’m guessing the whole of Australia will start throwing their popcorn at the screen! 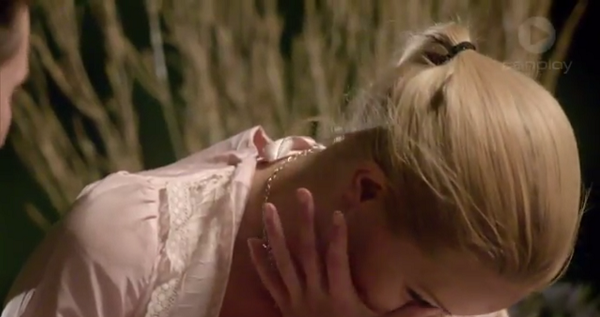 Surprise Group Date Rose Ceremony
I’m thrilled that they’re still in their medieval get up for the Rose Ceremony, because who can get enough 1500s fashion? Not me, McGee.

Akoulina. Look, I liked her. Do I think she was gonna be right for Matty? No. But was she here for the right reasons and make for decent tv, sure. I wish her well, and hope to see her in a Cirque du Soleil sometime soon.

Osher bids Akoulina farewell in his best elevator voice, and one of my least favourite things about this season is that we haven’t had any farewell-limousine videos yet. I feel like Akoulina would have nailed that, and we’ve been robbed.

My style pick of the evening: 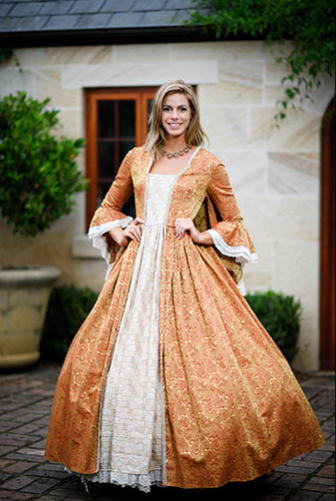 Alix threw just the right amount of humour into her moments with Matty in the garden, asking if this dress makes her butt look big. Simple, but clever.