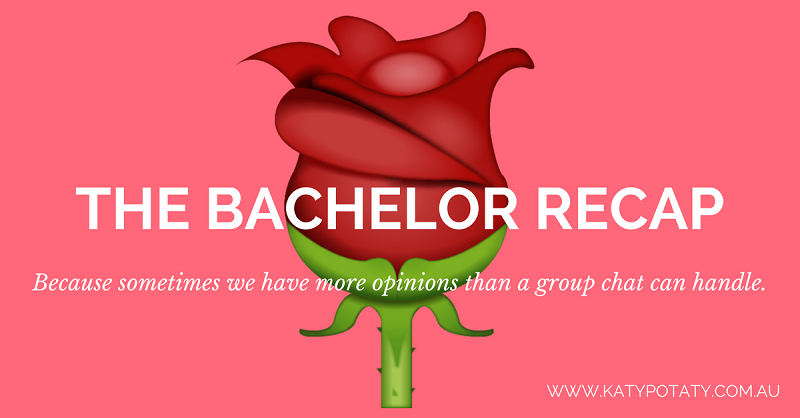 ‘Is it me, or does this house feel nice and relaxing?’, says Tara as we open to the ladies fully-dressed and waiting for a date card. Just once, I want the camera to pan to one of them in trackies and Uggs (because big mansions are cold), laying on the couch picking their fingernails. After all reiterating just how glad they are that Jen is gone (read about her exit from the drama kabana in my last recap), it’s clear to see that she was not liked at all – so it’s less a case of the Bachelor producers casting her as a villain, than Jen just being a nasty bit of work.

Osher turns up – not wearing a bomber jacket this time – to deliver a single date card, which asks Laura ‘Do you believe your destiny is written in the stars?’ while poor dateless Simone is wondering why she’s even there. (Honey, it’s because you make good click-bait for the Daily Mail. Those topless-Warnie-party photos are the gift that keeps giving clicks.) 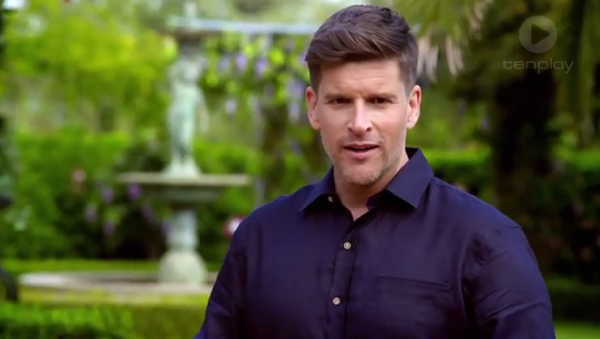 Matty picks up Laura and takes her for a star-themed date, they start by visiting well-coached psychic Madeline-Marie (she actually reads jewellery – is that a thing?). Apparently holding Matty’s watch, our psychic feels that whilst they’re a compatible couple, Laura is a little cautious going into this experience (well, duh). I’m actually wondering why our jewellery-reader isn’t reading Laura’s jewellery – I mean, Laura designed her jewellery so one would assume it could say more about her than Matty’s watch?

Some pithy relationship advice follows, about Laura having to open up yada yada, before they head to the Sydney observatory for a magical night.

This is where I get pretty jazzed, because my husband took me to the Sir Thomas Brisbane Planetarium for a very special evening when we were dating, and I’ll never forget holding hands in the dark, laying back in big comfy chairs looking up at the Cosmic Skydome, a 12.5-metre-diameter projection dome, and picking out constellations we knew. The science nerd in me (look, she would have gone further in like if there was a maths nerd in me too) freaking LOVES it. Boys reading this blog – take note. Also, why are you still reading? My slow cooked shredded beef taco recipe is over here, you can click away now. 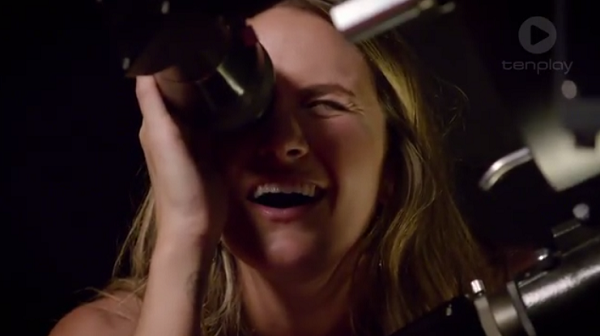 The date takes an unfortunate turn when Matty and Laura are given the opportunity to name an unnamed star, and they regrettably go down the celebrity joint-name path and call their far-away baby Mataura. Just nope.

Also, a tiny little bell goes off in my memory bank from the blurry/boozy year I lived in New Zealand, so I did a quick check on Google Translate, and yep, mataura means crazy.

After their Observatory date (which seems remarkably short for this far into the season), Matty and Laura settle down for a fruit platter and chat, and Laura explains that she’s worried about opening up (uh, these girls are broken records), they share a kiss and Matty pulls a rose put from under the Bachelor rose blanket. (Don’t tell me you don’t think it’s actually called the Bachelor rose blanket on set.)

Before we go further, I’d like to draw your attention to one of Matty’s bad habits. I’ve noticed that whenever a contestant is opening up, and sharing a little about her feelings for him (and perhaps even concern that he might not like her as much as he likes him – a common theme), he just kisses the girl. Doesn’t respond, doesn’t validate her thoughts and feelings, just kisses her. I get that he needs to hold his cards close to his chest, but he could use his words a little more, and his lips a little less.

The next day’s group date for all the girls has Laura, Simone, Cobie, Elise, Florence, Tara, Simone and Lisa walking into the ultimate kid’s birthday party; and is a walk down memory lane for those of us who attended kid’s parties in Australia before dessert tables and professionally made rainbow unicorn cakes were a thing.

I’m particularly delighted that we’re kicking off with the classic ‘donut on the string’, and Simone’s smaller gluten-free, taste-free donut gives her a competitive edge and she takes out the first game! 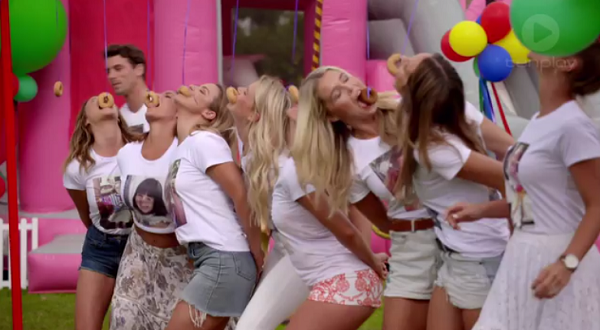 Next they all have to rub up to Matty to pop balloons which have childhood memory notes inside, and everyone enjoys the chance to rub bods. Even Osher looks like he wants to play.

The next game is another classic, Pin the Heart on the Bachie. After most of the ladies stick their heart to a sweet spot on Matty, like his smile, eyes or heart, Simone lowers the tone by sticking her heart to his bulge. That’s her word, not mine.

We finish up the party with special time with Matty spending time with each contestant and a piece of nostalgic and personal memorabilia . We see childhood teddies, ballet slippers, and waterpolo caps.

Out of all the memorabilia chat , ten points to Elise for having a pair of terry towelling bucket hats. Because Straya. Evidently, Matty likes a bucket hat too, because he rewards Elise with some one-on-one time in the mansion’s Secret Garden. Again, there’s some opening up, and a sneaky pash.

At the evening’s cocktail party, Tara looks smokin’ hot, rocking bombshell-pink lipstick and a body-hugging blush dress. Laura is struggling to watch other girls flirt with her boyfriend, and Elora and Matty head into the Secret Garden for the chat that we’ve been waiting for – is our exotic fire twirler ready to settle down in Australia? (Or more to the point, is she ready to be followed around Sydney for the next year or so, having her every move followed by the Daily Mail? I say no.) 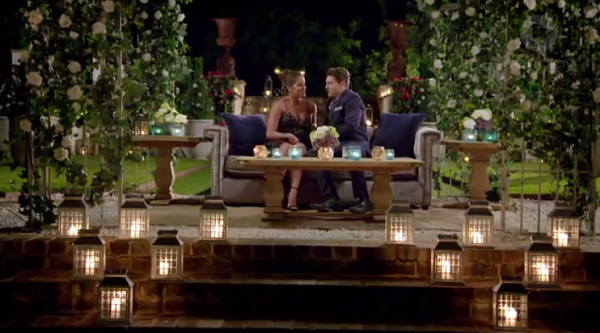 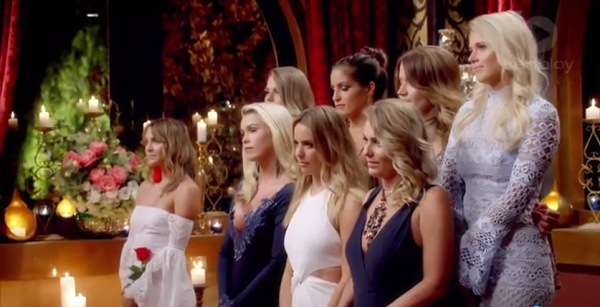 Simone. We all knew it was coming since she hasn’t been asked on a single date, and so did Simone. She takes it better than expected, and we are spared a dramatic limo cry. 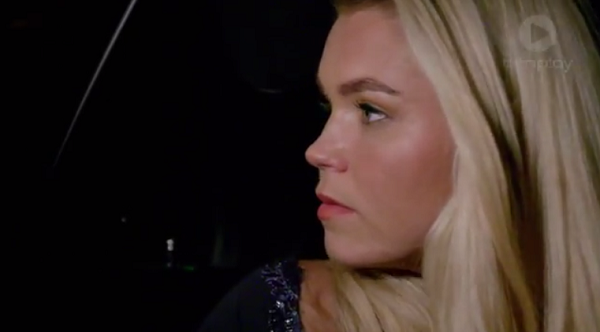 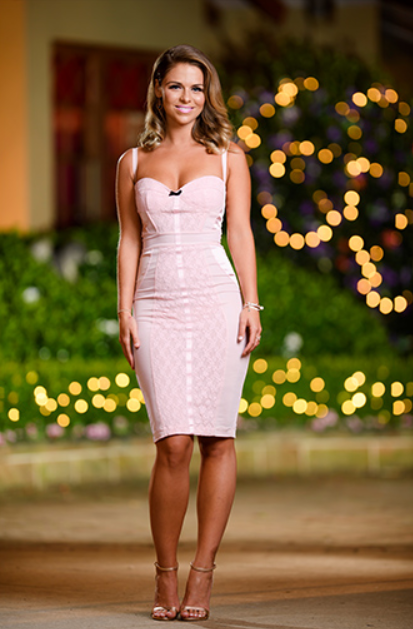 Tara’s Wheels and Dollbaby dress is stunning, and suits her curvy little figure so well. 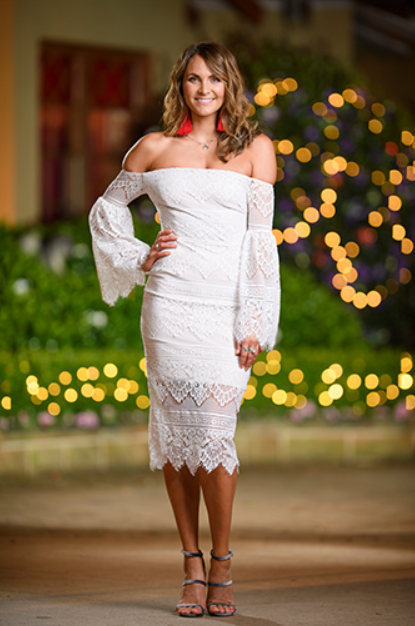 We all know I’m a sucker for an off-the-shoulder frock, and paired with bright tassel earrings, Laura is on a winner with this Giselle and Sophia dress (currently on sale in navy and wine.)